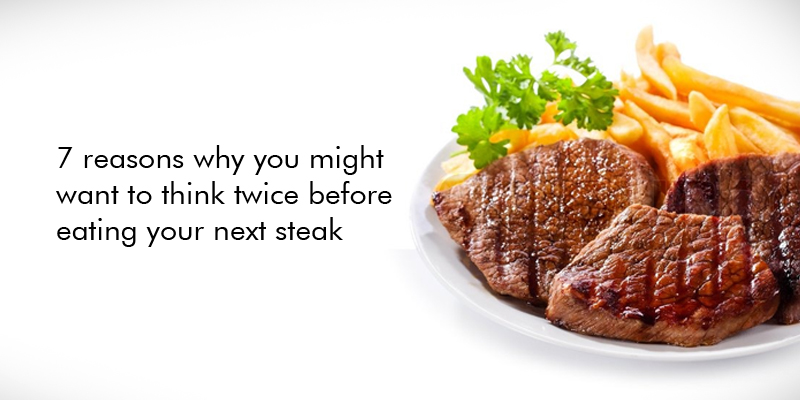 You know the statistics that eating red meat will reduce your life by several years, and you’ve probably heard of pink slime. If, for some reason, you’re still inclined to eat meat, here are seven reasons why you might want to think twice before eating your next steak.

Why you should not eat Meat

A report from the Food and Drug Administration found that, of all the raw ground turkey tested, 81 percent was contaminated with antibiotic-resistant bacteria. But ground turkey wasn’t the only problem. These bacteria were found in some 69 percent of pork chops, 55 percent of ground beef and 39 percent of chicken.

Antibiotic-resistant bacteria are known as superbugs. The use of antibiotics on factory farms, in order to bring animals to slaughter faster or to make up for crowded conditions on feed lots, is one of the reasons why antibiotic resistance is on the rise.

Government data has revealed that one antibiotic-resistant strain of a germ called Enterococcus faecalis, normally found in human and animal intestines, was prevalent in a wide variety of meats. This means that the meat likely came into contact with fecal matter — and that there’s a high likelihood that other antibiotic-resistant bacteria is present too.
How’s that burger looking now?

Antibiotics are used in livestock to make animals grow faster and to prevent disease. Some 29.9 million pounds of antibiotics were sold in 2011 for meat and poultry production — compared with the 7.7 million sold for human use, according to the Pew Charitable Trusts. And that number has been on the rise.

Dr. Gail Hansen, a veterinarian and senior officer for the Pew Campaign on Human Health and Industrial Farming, believes the use of antibiotics in animals is out of hand:

We feed antibiotics to sick animals, which is completely appropriate, but we also put antibiotics in their feed and in their water to help them grow faster and to compensate for unhygienic conditions. If you have to keep the animals healthy with drugs, I would argue you need to re-examine the system. You don’t take antibiotics preventively when you go out into the world.

School districts and parents had not been aware that some 7 million pounds of meat served up in school cafeterias was coming from scraps swept up from the floor. These meat parts were then sent through a series of machines, which grind them into a paste, separates out the fat and lace the substance with ammonia to kill bacteria, such as salmonella and E. coli.
The end product, known as pink slime, looked disgusting. And the puffs of ammonia used to kill the bacterium E. coli really grossed everyone out.
It turns out there’s also another cleaning product used in meat production. According to the website MeatPoultry.com, “99 percent of American poultry processors” cool their “birds by immersion in chlorinated water-chiller baths.”
Yum.

What you think is a slab of meat, perhaps a filet mignon, often turns out to be comprised of meat scraps held together with something commonly referred to as “meat glue.” Officially known as “transglutaminase,” the product has its origins in the farming industry, when the natural enzyme was harvested from animal blood. Nowadays, it is produced through the fermentation of bacteria.
The FDA has ruled that meat glue is “generally recognized as safe,” and it is required to be listed as one of the ingredients. However, it’s unlikely that any restaurant or banquet hall would list the ingredients of its meat on the menu.

Ever thought of going vegetarian?

In 2010 the Department of Agriculture’s inspector general condemned the U.S. for allowing meat containing pesticides, heavy metals, veterinary drugs and other chemicals to reach supermarket shelves. That’s because the country’s standards for testing meat for pesticides and chemicals were so lax that, in 2008, Mexico turned back a shipment of American beef because it didn’t meet its standards for copper traces.

How about a veggie burger instead?

American beef is so heavy in hormones that the European Union has said it doesn’t want the product. The European Commission’s Scientific Committee on Veterinary Measures claims that hormone-heavy beef production poses “increased risks of breast cancer and prostate cancer,” citing cancer rates in countries that do and don’t eat U.S. beef. Perhaps you didn’t know that the synthetic hormones zeranol, trenbolone acetate and melengestrol acetate are a routine part of the recipe for production of U.S. beef.

Have you ever wondered why those steaks on the supermarket shelf are so red? That’s because as much as 70 percent of meat packages in stores are treated with carbon monoxide to keep the meat’s red colour — oxymyoglobin — from turning brown or gray — metmyoglobin — through exposure to oxygen.

According to Ann Boeckman, a lawyer with a firm representing major meat companies, consumers do not need to worry about being deceived. “When a product reaches the point of spoilage, there will be other signs that will be evidenced—for example odor, slime formation and a bulging package—so the product will not smell or look right.”