Significance of Nirjala Ekadashi – Health and Spiritual reason and benefits

Significance of Nirjala Ekadashi – Health and Spiritual reason and benefits 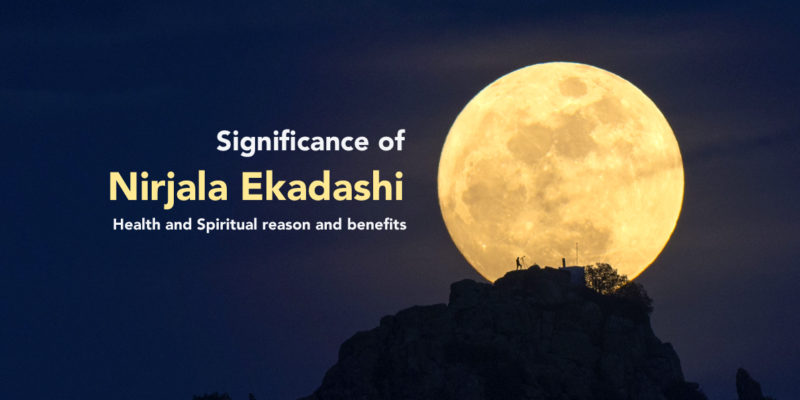 Let us just focus on its scientific background and not talk about the religious stories associated with it much because those are known to all.

Fasting as such is wonderful for our health. The question arises why one should deprive one of even water, that too on a day which falls during the height of summer (11th lunar day in the waxing fortnight of the Hindu month of Jyestha). It is considered the toughest of the 24 Ekadashi fasts.

Why moon is given that much importance?

According to the Vedic Classics, the movement of the moon on the day of Ekadashi has a direct correlation with the human body and mind. It is believed that during Ekadashi, the water in the body shifts in such a way that it puts pressure on the senses, making them more prone to worldly pleasure.

Water occupies 70% of the human body and thus is under heavy influence of the moon on this day. Hence, to keep the system in order, devotees and spiritual seekers recourse to Nirjal fasts (fast without water). Meditating and worshipping god on this day generate favourable influence on the mind and helps in spiritual elevation.

Astrologically moon revolves around earth at the rate of 12 degrees every 24 hours.
This period of 12 degree travel is called a tithi.
Moon when 180 degrees away from Sun forms Full moon day and when conjoint with Sun forms New moon day.

During these two cycles we have seen many instances where New moon and Fullvmoon shows its impact and magnetic power of sea tides and human minds.

Because human body is 70% water, it is always under the influence of moon.
It is also stated in Garuda Purana that all seven oceans are in human body itself.
That is the reason behind moon being treated as mind controller in astrology.

Spiritually to attain control over senses devotees resort to Upavsa. Upavasa also means to reside (vasa) nearby (upa), that is moving closer to the almighty or spiritual consciousness. It is believed that by observing fast on these days, one counteracts negative influence generated by the influence of the moon. By fasting mind attains maximum efficiency giving the brain a better capacity to meditate.

Related to astronomical phenomena or more precisely to the position in regard to each other of the Earth the Moon and the Sun.
It is known that the Sun and the Moon do not always exert the same influence on the Earth …

On 11th day of each cycle moon forms trine with earth or sun.
From this day moon’s influence on liquids in our body and mind starts rising.

As long as important organs such as brain, digestive system function properly our body will never get any disease.

All diseases start with indigestion.

But from this 11th day, our body gets into the magnetic pull of moon heavily and our digestive system doesn’t secrete proper fluids that will help us digest our food.

From this 11th day till 5th day after New moon or Full moon day, moon will influence us maximum and imbalance our digestive system.

This will also cause decrease in brain’s functioning and cause weakness in memory, thought and decision making.

So, to avoid all these complications , it’s important to clean our digestive system on every 11th day of lunar cycle.

This helps our digestive system to clean up all the food and mess in our body till 10th day and adjust itself for the next 10 days of lunar influence.

When dry fasting, even more, stem cells are released into the blood than usual, a fact that has been proven scientifically. During dry fasting, the body begins a cleansing process that rids itself of old and sick cells.

This creates vacated space in tissues for new stem cells. Stem cells are released into the blood in higher volume, occupying this vacated “space” and promoting regeneration and rejuvenation processes. The regular practice of dry fasting can extend life, youth, and vitality by 15 – 25 years.

Inflammation cannot exist without water.
Going without water significantly lower the concentration of inflammatory markers like these:

Harmful microorganisms need water to survive. Dry fasting is an amazing tool that can address many acute health issues and degenerative conditions.

Dry fasting forces the body to obtain water from the cells. That is why damaged tissues (fat deposits, oedemas, tumours) are eliminated faster.

The body knows exactly what to do. It starts by burning everything that is non-essential and harmful to the body.

Fat, tumours, ganglions and inflamed tissues. During dry fasting, cells split faster as the body needs not only nutrients but also water.

Dry fasting also eliminates parasites and promotes regeneration of healthy tissues. Dry fasting creates a hostile environment where every cell of the body can clean house. Only the strongest and healthiest of cells survive in such extreme conditions.

Irregularities like cysts and benign tumours dissolve as a result of autolysis. The process by which the body sacrifices its sickest cells for its own survival.

During dry fasting, a process of intense cleansing begins as toxins are eliminated. But purification takes place not due to external water, but by the cleaner, high-quality metabolic water synthesised by the body.

During a dry fast on Nirjala Ekadasi, the body survives on what is called endogenous or metabolic water. This ounce external water is like super water the body has used, filtered and fortified.

Unlike any external water, this metabolic water is of super quality, produced by the body’s cells after cleansing. This water had all imprinted negative information erased, allowing cells to experience a revitalisation.

All the body’s tissues through which blood and lymph circulate are purified of external content.
To compensate for the lack of available water during a dry fast the body begins absorbing atmospheric water, carbon dioxide and nitrogen from the air. It also begins to manufacture its own amino acids.

For most people who practice dry fasting, they use it as a way to feel younger, renewed and invigorated.

Body will lose some weight by end of this day.
Astrologically, this is the time when Sun enters Arudra Nakshatra (Daruna Sangyaka) in Gemini and Moon is at Trine to Sun.

Earth is said to be entering its yearly menses on this days (annual cleaning process) and every living being on earth will have slower digestion.
So, ideally this is the day for dry fasting and meditation.

According to a story in the Brahma Vaivarta Purana, Bhima decided to observe a fast on all Ekadashis. However, true to his nature, he soon felt ravenous and wondered what to do. Muni Vyasa advised him to observe just one ekadashi, the Nirjala Ekadashi, which would fetch him the virtues of having observed all 24 ekadashis, this one being the toughest.

Bhima did perform Nirjala Ekadasi. But, as expected, he became unconscious by next morning. He was offered water from the river Ganga along with the holy tulsi leaves to revive him and also break his fast.

So, if even you find it tough to observe it, there is nothing to be ashamed of. You cannot be stronger than Bhima.